First, hotel living SUCKS. But having a new kitchen in a couple more days? AWESOME.

My sincerest condolences to the family of the little boy who fell to his death at Pearson airport. I know you will never ever be the same. May your memories of him eventually bring you comfort. May your faith in God give you strength.

In other safety news, GIANT crib recall. Now, I'm affected by this - my son sleeps in a recalled crib. The same one his brother slept in. This worries me, because I've thought for a while that this crib sucks. The latches on the drop side suck. They're crappy crappy plastic. I can't help but think that Storkcraft products went to hell some time back. Like about the time they started outsourcing to China, I'm thinking. Maybe not. But that's just my feeling.

So now what do I do? Wait for the crappy replacement kit like I did last time there was a recall? Use the crappy replacement kit when it eventually arrives (took 9 weeks last time), even though the US is saying not to, because it's also crappy plastic? Use the crappy kit and then what? Then the side won't go down. Same problem if I buy a new crib. I have a very bad back. I can barely get him into a playpen when he's asleep when I'm having a good day. On a bad day? Forget it. And what are short women to do? My best friend is 4'11''. How she'd ever get a child into a crib without drop sides is beyond me.

It really bothers me that companies don't give a rat's ass about child safety, and give even less of a rat's ass about how Moms are going to get kids into those beds. Cribs are clearly designed by men, which is ridiculous because it is women who do that vast majority of the child rearing when the baby is crib age.

Rambling on about Christianity and the UCC

Holy crows. It's been 2 weeks since I posted. Where does the time go?! Oh right... the kids.

Snap, my 14 year old, is in Vancouver this weekend. She went to a big United Church youth and young adult event. She phoned last night, and told me she was having fun. Said there was one speaker who was REALLY impressive. Here's the write-up on the conference site:


Doin' Time with Peterson Toscano
Peterson Toscano In this presentation you will witness the Best of Peterson Toscano as he presents excerpts from original plays including The Re-Education of George W. Bush, Queer 101--Now I Know my gAy,B,Cs, and Doin' Time in the Homo No Mo Halfway House. Peterson will also share extracts from his newest play, Transfigurations, which looks at the stories and lives of transgender Bible characters.Mixed in with the performance Peterson shares his own story of trying to 'de-gay' himself and the process he took to integrate his sexuality with all parts of his life. You will laugh yourself silly and no doubt walk away challenged and hopeful about life, humanity and yourself.

Peterson Toscano is a theatrical performance activist from Hartford, CT. A Quaker, comic and world traveler, Peterson seeks to bring about truth and reconciliation through storytelling.

Well, colour me impressed. With the church for presenting this, him for sharing it, and Snap for being mature enough to handle it.

I've been thinking about my church and its progressive mandates. Especially in light of the nonsense Dr. Dawg is calling HUAC North and the UCC's recent controversy. Unlike the Catholic Church, the UCC is a bottom up church. The congregations make the policy. But, of course, each congregation is different, as I well know, as I go to two churches regularly (2 weeks to one, then 2 weeks to the other). A single congregation may not be nearly so affirming as to accept Mr. Toscano willingly and welcomingly. Another might feel like home to him. In Church A, a trans person may be openly gawked at. In Church B, treated like family. All in the United Church. Hell, all in one city! One of the churches I go to is full of about 100 old white people. There's one black lady, one Asian man and Iranian man. I am one of 5 regulars under 40 years old. There are two gay couples. Some people still refer to the acceptance of gay people in the church as "the big issue". It's mind-blowing. The other church is even smaller (about 40 regulars), but at least 2/3 are under 50 and there's an active youth program. It's less traditional. I suspect a male body in a dress wouldn't garner so much as a second blink at that church.

I'm not sure entirely what my point is here, except to remind the masses, and myself, that Christianity isn't a big monolith. Every Christian is different. Some are good people, some are not. All are trying. Some, in my opinion, miss the point by MILES! But here's the thing... if you know your gospel, you'll know the story of the blind man in the tree who was hollering for Jesus to help him. The people with Jesus shushed the man and told him not to bother Jesus. Jesus goes over to the man and cures him of his blindness. The point of the story that I was always taught was that no one is too lowly for God, everyone was worthy. But there's another point. Even the people Jesus chose to surround himself with missed the bloody point as often as they got it. Mind you, they didn't have two thousand years to study his teachings! You'd think that some people wouldn't be threatening to withhold food from innocent people in order to get their way. They make me sad.

So that's my rambling for the day. Hopefully I can find a few minutes to get on before 2 weeks goes by again. Especially because I'm having kitchen renos next week and my husband's parental leave will be over in 5 more work days! GAH!
Posted by Luna at 11/15/2009 03:37:00 PM
Rambling on about Christianity and the UCC
2009-11-15T15:37:00-08:00
Luna
christianity|queer issues|Snap|UCC|
Comments

Pumpkin Pi and other FAIL 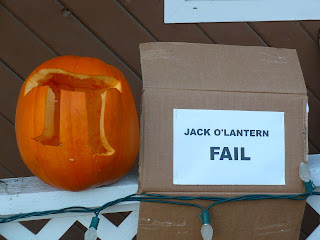 Why yes. We are geeks. This was totally wasted on our neighbours, who totally suck. Not only because they don't do the Halloween thing - seriously, we had 3 kids, and we live on the busiest street in our little city. No, our neighbours suck, because they lined the street to watch the stupid Olimpdick torch relay go past. Not cool. I admit, I was seriously angry as it went past. After all, they cut massive amounts of services, just to throw this stupid sporting event. One service in particular affected my family. The EIBI program that my son was on the waitlist for is done. His best shot, gone. I thought I was over it, but no, as that ridiculous display of bullshit went past my house, I was livid. I was in tears. And I wanted nothing more than to go out there and holler obscenities at them all. And yes, I thought of going out there and protesting, but I didn't. And you know why? Because as a parent of two autistic kids and an infant, I couldn't find 20 free minutes to make a freaking sign. Blog posts I can manage because I can leave them and come back. If I left the markers and paper, I'd come back to a HUGE mess. Otherwise, I'd have been out there, pissing off the neighbours. And I wouldn't care, because if they can go out and line the streets to watch an oversized joint go by, they can line the streets to scream about funding cuts. But they don't. And they never will. That's Canada.