It's Day 4, and it's just barely past noon, and I'm done my challenge for the day. And that's good, because my in-laws arrive tonight, so I'm probably out from here until Day 13. And what's the theme of the day? Patience. LOL. Too timely.

Patience! Other than my niece's name, this word doesn't mean much to me. What's patience? Waiting calmly and happily for something? Waiting without complaining? Hell if I know. It's easier to recognise it when it's lacking, I think. 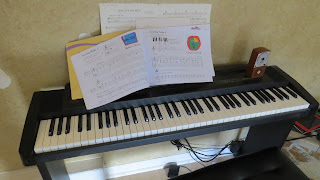 This is my piano/keyboard. My 7 year old son is taking piano lessons, and I've always wanted to learn too, so I'm taking lessons with him (midlife crisis? Maybe.) And what I do know is that patience is something I don't have with it. I want to be good now. I want to be great now. I want to sit down and accompany the family on a Christmas singalong (ha! Like I'd *ever* get them to do that.) I want to be able to sit at it and reproduce the beautiful music I hear on the radio. And I can't. I mean, I have a good ear, so I can pluck it out on one finger, no matter what the song, but chords and rhythm tend to help. :) So I'm learning to be patient with myself in learning something new at 40somethingmumble.
I think patience and love go together hand in hand. Remember "Love is patient, love is kind" (1 Corinthians 13:4-8), right? I think patience is love. Being patient with a crying child is just loving that child. Being patient with myself as I learn how to play Bach or a random Christmas carol is loving myself. And God loves us perfectly. God is patient with us as we screw up over and over again. Patience isn't getting angry and yelling or throwing thing. Patience is remembering to love the person. And maybe sometimes it's just acceptance of things one cannot change - like the long line of cars ahead of me or the racist attitudes of that in-law who never shuts up.
All I know is that patience is a virtue because it's grounded in love.

Email ThisBlogThis!Share to TwitterShare to FacebookShare to Pinterest
Labels: advent


Thankful. I'm so thankful. Even on days when I'm railing against the injustices in the world. Even on days when I see the forest around me being cut down for more single family homes. Even when I hear about atrocity after atrocity. All I can say is "Thank you", because I have so much. So much I feel guilty about it. And by the standards of my community, I'm not wealthy. (Funny story: When one of my kids was having various issues, we had a lot of support staff come in from the province. They would bring us gift cards from the local grocery store because they thought we were poor. We also "won" the Christmas raffle that year. Suffice it to say, that all was donated to actual poor people. We just look poor because we don't really give a crap about having "nice things").
ANYWAY, I am super blessed with Enough. Enough is one of my favourite concepts. I never pray for abundance. I pray for enough. Enough food, enough clothing, enough money, a house that's good enough, etc. And so often I get even more.
I had a hard time narrowing this down to one picture. I was considering a picture of my kids, my husband, my home, my Mom, my Dad, my birth parents for giving me up, the beauty around me, my son's team of doctors ... The list goes on. Finally, I just went through my pictures until something spoke to me. 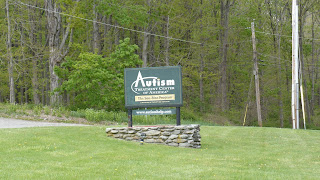 This is a picture I took at the Autism Treatment Center of America, near Sheffield, Massachusetts. I was lucky enough to go there three times, to learn how to train people to work with my kids. These three trips changed my life in so many ways, I can't even begin to tell you how transforming it was. At the ATCA and Option Institute (they're part of the same thing), I learned that happiness is my choice, and more importantly *how* to choose it. I learned to view Autism as a blessing in my life. Everything about my life changed for the better when I went there. Bears Kaufman (Barry Neil Kaufman, should you want to find his books) and his amazing wife Samahria developed the Son-Rise program and the Option Process, and for that and them, I will always be grateful. If you're considering who to donate to this Christmas, consider them. They're a registered charity, and they do a lot of good work helping people come to their programs.
Posted by Luna at 11/29/2016 04:49:00 PM
Day 3: Thankful
2016-11-29T16:49:00-08:00
Luna
Comments

Day 2: Longing ... to be better at challenges

So evidently I suck at x-a-day challenges. I missed Day 2. It was "longing". I had nothing. I long for the end of greed. Not sure how to photograph that.

Advent is here! I love Advent almost more than I love Christmas. On a Facebook page I help moderate, we're doing the Advent Photo-a-Day. Today's theme is Hope.


Hope. It's my favourite topic to blog about. There is no such thing as false hope. There is only hope. You can hope for the impossible and work to make it possible. And if you don't get there, you still had hope. Without hope, there is no motivation for anything. 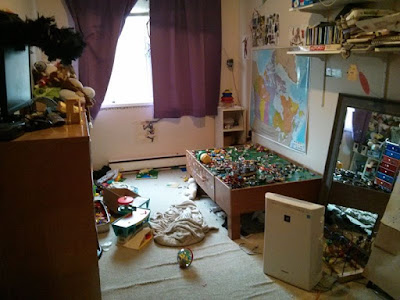 This is my sons' playroom. This is where the therapy happens. This is where magic happens. My boys are autistic. My elder boy profoundly so. In this room, they have almost total control of their environment. The therapist plays with them where they're at, and pushes them to succeed. My littlest has responded so well that doctors are stunned. They throw around words like "miracle" and "amazing". My elder boy, he's not responding as well, but he has complex medical issues too. Have we given up? Hell no. While there is life, there is hope.
Posted by Luna at 11/27/2016 07:55:00 PM
Advent Photo-a-Day Challenge. Day 1: Hope
2016-11-27T19:55:00-08:00
Luna
Comments

Y'all have heard about the safety pin initiative, right? White people who consider themselves allies are putting safety pins on their coats as a sign that they're allies. Or something. Depends who you talk to. And the backlash is epic. From snark like "If only we'd had safety pins in 1933" to legitimate serious questions about what they mean? Does a pin mean that person will stand up and help? Or is it just a little feel-good way of saying #NotAllWhitePeople without doing any work? Good question. And I think it probably varies from person to person.

For me, I'm going to wear one. Why? Because if someone who is in a marginalized group needs help on the street, and they're scared that the response might be "Fuck off, $Slur", a little safety pin might be enough to allow them to ask for help. From something as little as "Can you help me get that off the shelf, Tall Human?" to "Help! I'm being harassed by bigots". And while the pin is no guarantee whatsoever, it's a tiny thing.

That's the thing. I know the pin isn't the answer. I know the pin doesn't really solve a single thing. I know the pin isn't something that guarantees a damn thing. But I also know that I have basically no power as a single individual. I can't bring down fascism myself. I can't end racism. I can't make my bigot brother vote for a decent human. I can't make my mother stop being afraid of minorities. I. Cannot. Do. This. I can keep talking to white people and learning from Indigenous people (the most marginalized group in Canada) and other minorities. And, I can offer a tiny sliver of hope that I am not going to hurt you if you talk to me, a sliver of hope that I can be trusted to help. And hell yes, trust is earned, not due because of a pin. But I also know if I need help, a wee clue about who might be safer than the next guy is a good thing. Mom always told me when I was little that if we got separated, I should look for a woman with children. It wasn't a guarantee that she'd be helpful or useful or safe, but it was definitely safer than a random man.

I see lots of angry people demanding we progressive white people do more. I'm not sure what it is we can do. Because the bigots don't listen to us either. We're losing friends, family, and loved ones to the hatred. We're not the victims, I know, and I'm not complaining. I'm saying that I have lost family, my friends have lost family, my family has lost friends. Because we are standing up for you. We are saying that bigotry isn't okay. And they don't care. We're writing to our politicians. We're donating money. We're educating our kids. But we're outnumbered. Vastly.

So no, safety pins wouldn't have helped in 1933. And they won't help much now either. But a question for the angry progressive people who are mocking the idea of a visible symbol of support, do tell, what should progressive Germans have done in 1933? And what should progressive Americans do now? And for the Canadians like me who are worried we're next in the fall to global fascism, what do we do? Because "Don't normalize it" isn't helping any more than pins are. We need concrete ideas. Plans. Roadmaps. Because we are fucking trying, and it isn't working.